It was late, and Pavel was the last to leave the building, just like he always was. But this time, instead of hurrying home, he stood nearby for a while, looking around while checking his watch, brows furrowed. Waiting. Suddenly, a large truck turned around a corner and approached the building …

That night, he couldn’t sleep. Would she like his surprise, he wondered? He had paid the gardening company a lot of money – blooming flame-trees did not come cheap, especially not at that size. But if she liked it … If she liked it. How long had he been in love with her? Forever, he thought. Forever and ever… Buying secret, anonymous gifts for her, while never quite daring to let his true feelings towards her shine through.

He sighed again. Life was unfair. But he felt utterly realistic about his chances with her: a small, thin man with ridiculously large glasses, while she … She was tall and stately and utterly zaftig! So full of life and lush vigour, you felt revitalized just by looking at her. Like a young and blooming beautiful rose! Dreams … He hoped she would find the small poem he had penned. Though suspecting how dreadful his poetry really was, maybe it would be better if she didn’t … “Burning fire in my heart, that is what you are …” 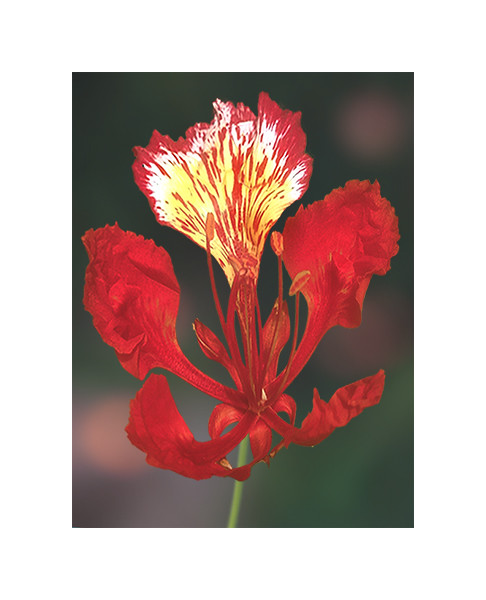 Next morning, as Veronica came to work and opened the window next to her desk, she could not believe her eyes. Flames! The most fascinating, living flames, glowing and weaving right in front of her face! Somehow a large tree had appeared there overnight, full of fiery flowers! She felt like she had dropped right into a fairytale. Reaching out, still disbelieving, she touched one of them. Delicately soft, and … Oh, my God, it was real! As she looked closer, a small, wrapped piece of paper hanging from a branch nearby caught her attention. She took it, unwrapped it and scanned through the lines written there. Her eyes widened … and then she ran to the shelf behind her desk and opened the drawer where she kept her favourite book. The dedication, the dedication … Hands shaking, she opened it. Yes! Oh my, but yes! It was him! For the first time ever, the secret admirer had left an actual, handwritten note. And – it matched! The handwriting matched! The way the ‘e’ curled, and the small, special tilt of the ‘l’ and ‘t’.

She felt faint and covered her blushing cheeks with her hands. All these years, in love with him – so hopelessly in love with him. Fascinated by his character, integrity and brilliantly fierce intellect, and the way he still seemed to somehow see not only the science and the deep theories – but the people behind the science. And yet, every time she tried to show any attention or interest in him, he seemed not to notice at all. But of course, she thought. Who am I that he should be interested in me? A junior scientist of no real reputation, big and fat and clumsy. While he, he was not only a certified genius of great fame in his field but virtually the life of every party he joined. She shook her head and reread those lines …

All-day, as she tried to concentrate on the work before her, the fiery flowers glowed and shone outside. Calling to her, beckoning, urging her. And so at last, she gathered her courage, grabbed some papers, and went to the corner office …

“I think I need a break,” she told him. “So tired of this dusty city. You mentioned once that there was a restaurant in the forest, cosy and idyllic? Is it too far to go on bicycle, do you think?”

“That would be wonderful!” she exclaimed happily and felt proud at the way she kept the tremor out of her voice. “Could you collect me at my home in an hour or so? I live just nearby … ?”

“Of course,” he replied, a bit distantly she thought, as he adjusted his glasses, avoiding her eyes. “It is no problem at all.”

It was late afternoon when they finally arrived, and as she got out of the car, Veronica sighed happily. Oh, how good it was here! The air was so surprisingly clean and fresh, and the earth was covered with a carpet of graceful snow-white flowers. Birds sang and trilled joyfully everywhere, and the young, tender leaves on the trees answered them with soft whispers in the light breeze. Glancing up, it seemed to her that they weren’t leaves at all, but small lanterns lit with the golden glow of sunlight to the celebration of life!

“Thank you so much, Pavel, for taking me to this heavenly place! Please allow me now, in turn, to invite you to dine with me,” Veronica said, with her most charming smile.

“I would be most delighted,” he replied after a long heartbeat.

Not surprisingly the restaurant, was very popular indeed. For a while, it looked like there were no empty seats anywhere. But after Pavel had spoken quietly with the waiter, they were guided to a table in a quiet alcove. Almost completely hidden away behind a lush rose bush with beautiful, fiery flowers.

For some time, they sat there in silence, sipping the crisp, sparkling white wine and surrendering to the delight and thrill of spring. Finally, he dared a look at her. “You look very beautiful in that red dress,” he told her. And then immediately looked away again, feeling suddenly shy and all tongue-tied, like a schoolboy. 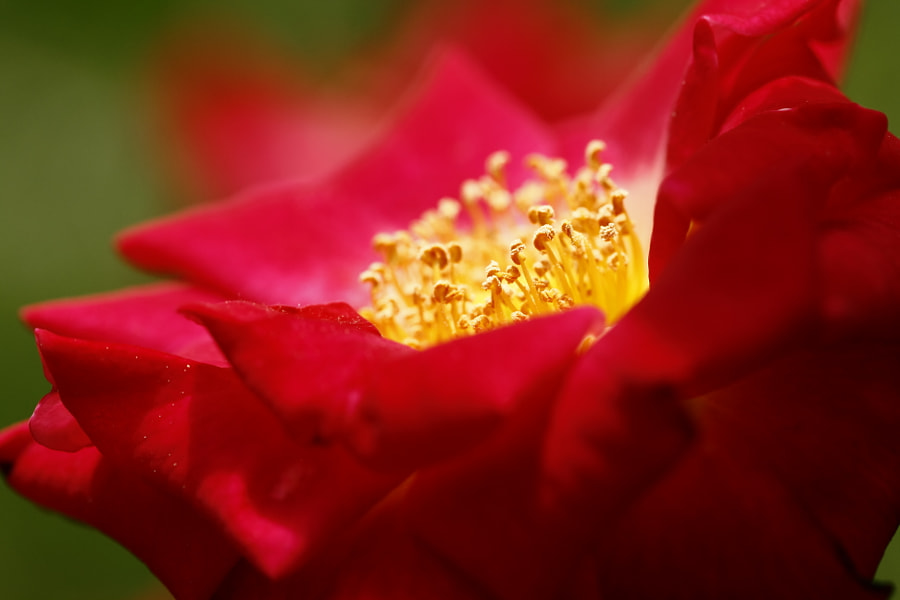 He felt her eyes on him then, burning into his soul. “It reflects my mood,” she replied with an enigmatic smile. Leaning over, she took in the scent of the flowers with a deep breath. Then, still touching the bud with her fingers, Veronica whispered, “That is what you are, in my heart…”

Photography (in order of appearance)
“Flamboyant Red” by Praṇav – Let there be….. LIGHT!
“Fuego” by NINES Salvador

Join 295 other followers
Follow Reflections of the Heart on WordPress.com